A good hand mixer, the top hand mixers in fact, should be powerful enough for any type of duty ranging from relatively light action like making whipped cream, kneading dough, or whipping up some meringue to heavy-duty activities like mixing a thick cake batter. Granted, these mixers won’t have the same strength as a typical mixer; they still mix stuff in a relatively quick and consistent manner.

Unfortunately, finding a hand mixer with some reliability isn’t particularly easy – there are just too many new ones coming on the market each year having slightly different specs.

This article has condensed a few of the most important points into an easy article. And I have even included reviews of the top hand mixers available on the market.

How to Pick The Most Suitable Hand Mixer – Buyer’s Guide

Hand mixers serve as a tool that you hold in your hand and use in a separate. They do not have an attached bowl like a standard mixer.

This layout actually has one huge advantage:

You can use it on any bowl with no size limit. A pretty convenient feature.

Here are some aspects to consider before purchasing your next hand mixer.

All hand mixers come in a few different speed varieties:

One speed and multiple speed. I recommend a mixer with a minimum of three speeds, but five speeds is ideal. Obviously, a large choice of speed settings will give you more flexibility in the stuff you can mix.

Also, make sure that adjusting the speed settings is easy.

Attachments are a personal choice. Most people are perfectly happy with a hand mixer only containing two beaters. These mixers also tend to cost less than mixers with more attachments.

If you plan on using the mixer for many different recipes, then look at a mixer with different attachments for eggs and whipped cream.

This only applies if you purchase a mixer with a lot of attachments:

Make sure it comes with a carrying case for all the different attachments.

Ease of use mostly comes down to weight. You really don’t want a heavy hand mixer as that will tire your hand out when using it.

Also, make sure to look at the ergonomics of the mixer before making your purchase.

This list of best hand mixers is the best place to start when making your decision about the next hand mixer you purchase. These are all excellent hand mixers.

The Hamilton Beach hand mixer is the choice for someone that doesn’t have the largest budget, but wants a good hand mixer to use for a variety of tasks. The multiple speeds and relative power of this hand mixer earned a top spot on our list.

This mixer has a height of about 9 inches and includes a carrying case, which is awesome if you want to put it in your kitchen cabinet. It’s relatively small, so you don’t really have to worry about leaving it on the counter and taking up space.

I like the weight – 3 pounds. That makes it the least heavy hand mixer on the list, and the least heavy mixers available. For reference, 3 pounds is light enough for anyone to easily hold in one hand. And no, it doesn’t vibrate that much despite the weight.

I will say that the motor has a tendency to get hot rather quickly and it is loud. A little annoying, but nothing that you can’t handle.

The mixer has the normal beaters and a whisk included. The whisk is perfect for making anything that requires aeration.

Also, it has a handle that was designed with ergonomics in mind. This makes it comfortable for long use.

Finally, it has a groove that allows the mixer to rest on a bowl. You can’t use it while in use, but you don’t have to put the messy mixer on your counter when you place more ingredients in the mixing bowl. 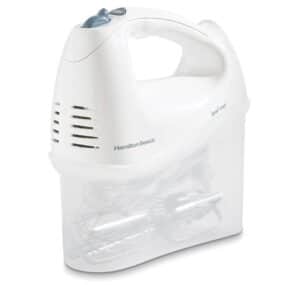 Breville has a nice electric hand mixer. It has a durable design, plenty of power in the motor, and works great for mixing. The only reason it’s not our top pick is it costs significantly more than the number one pick.

That price is certainly worth it, though.

This mixer has similar dimensions as the Hamiliton, but it weighs about a pound more at 4 pounds. The extra weight might make it a little more difficult to use this one handed.

Fortunately, it does have a very comfortable handle that fits smoothly in your hand.

As for speed, this mixer is a little slower than others, which is actually a good thing as it gives you more control. I also like the “intelligence” of this mixer – it can automatically detect the attachment that you are using and adjust the speed accordingly.

The upper handle has a load of neat features – an on/off button, a timer, a digital GUI, and a scroll wheel. This display is particularly nice as it automatically tracks the time you have spent mixing. That is extremely convenient for more precise recipes.

One other thing I like is the LED light that illuminates the bowl that makes it very easy to see what you are mixing.

How many speeds does a mixer have?

Nine different speeds. The transition between speeds is also very smooth, which will prevent ingredients from splattering all over the place.

If you have the budget and want the absolute best hand mixer, then this is the choice for you. 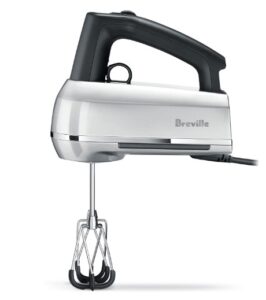 KitchenAid is a top brand in the kitchen appliance industry, so I have included there top of the line mixer on this.

As with all the KitchenAid appliances, this mixer is very easy to use, has a solid design, and a strong motor. It’s ther perfect choice for someone looking for a more affordable mixer that still performs well.

This mixer has very similar specs as the number one pick. However, it has slightly more power and a few extra (3) speeds. In fact, it has nine speed settings.

That’s more than enough speeds for this price.

My favorite feature that KitchenAid included is the soft start. Basically, the mixer slowly starts spinning, which prevents ingredients from flying all over your kitchen. And it’s quiet.

Finally, this mixer actually has a soft handle. This keeps your hand comfortable and gives you a little more control. Not to mention that the power cord is very simple to wipe down. Plus, the cord has the capability to plug into either end of your mixer.

I will say that this mixer has one advantage over other mixers:

With that in mind, if you plan on using your mixer to make a lot of whipped cream or eggs, then this is definitely the mixer for you.

KitchenAid does include a one year warranty on this mixer that will cover any manufacturer defects. You probably won’t need to use the warranty since KitchenAid is such a good brand, but it’s good to have the extra peace of mind.

All things considered, this is an excellent little mixer. I really can’t complain about any single aspect of it. KitchenAid really does make great products. 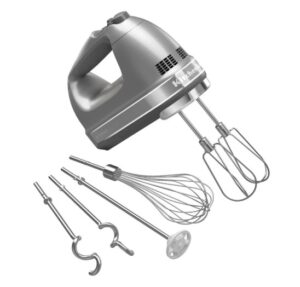 Black and Decker has a reputation for making affordable appliances that still work great. This review will cover the MX1500W.

It is an affordable pick, so don’t expect a lot of attachments or even a carrying case. It still has the same power that you would expect in a standard mixer, though.

The Black and Decker is extremely light at only 1 pound. On top of that, it’s also fairly small with a width of 4 inches and a height of 7.25 inches.

This makes it great if you live in a small apartment.

The mixer has five speeds, which is the minimum I recommend for an adequate mixing experience. Additionally, you can crank up the speed by pressing a button for a quick boost.

Unfortunately, the motor is a little underpowered at only 175W. A little disappointing, but the lack of power does prevent a lot of splatters.

Black and Decker also took the liberty of adding a button ejection for any attachments you may add. That feature is very useful because removing attachments by hand can be annoying.

Finally, this mixer has a soft handle that is actually comfortable to use. And Black and Decker did add a nice rest that allows you to place this mixer on the side of your bowl.

Perfect for adding any ingredients to the bowl in the middle of mixing.

It’s affordable. What else can I say?

Black and Decker still included plenty of nice features on this mixer while keeping it a good price. I recommend this mixer if you’re concerned with budget and don’t need a particularly fast or powerful mixer. 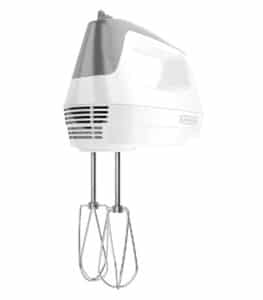 Do you do a lot of baking and need a mixer built for that?

If you do, the hand mixer by Decen is the choice for you. The 300W motor, stainless steel design, and durability make it great for all your baking needs.

This mixer is a very versatile mixer. I’d say it’s the most flexible mixer available!

It has six speeds, but don’t let that fool you. The difference between the speeds is wide. Remember, it has a 300W motor.

Plus, it’s stainless steel, so you know it will last you longer than many of the plastic mixers on the market. The stainless steel is food safe, so you don’t have to worry about toxic chemicals leaching into your food or anything like that.

The bigger downside with this mixer is that it doesn’t have a carrying case, which is a little annoying. Just make sure to wash it before storage.

It does make up for the lack of carrying case with button ejection for the attachments. That’s a convenient feature that can’t be overlooked.

Overall, I like this mixer for baking. It has plenty of power and the stainless steel construction will ensure that it will last you ages.

The only real complaint that I have is the lack of carrying case. It’s annoying, but can easily be solved by wiping down the mixer before storage or storing it in the box. 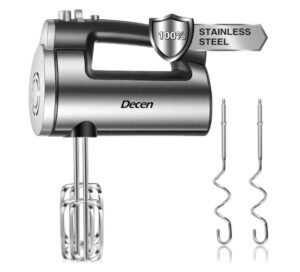 That covers it for the absolute best hand mixers available in 2022.

You really can’t go wrong with any of the mixers on this list. Of course, no mixer is perfect. You simply have to find the mixer that works best for your needs. And if you need a hand mixer, the convenience is really the main benefit compared to other options. Even professional bakers use hand mixers for the inherent versatility in them!